… read the article about our findings in Masfjorden that was published in Bergens Tidene, the local newspaper, this Monday! That’s a lot of people! The article is behind a pay-wall, but the journalist who wrote it, Atle, kindly allowed me to publish it here for those of you who missed it (and who reads Norwegian), so here it is:  Her kan fjordbunnen være i ferd med å dø (Originally published in BT 7/7 2020)

Luckily not everybody who read the article contacted me – but quite a few did; friends that I haven’t seen in ages who congratulating me on messenger, colleagues giving thumbs up on Teams, people  writing me to ask if I know anything about the situation in “their” fjord and a few Norwegian scientists that I’ve never met who asked me to send them a copy of the original paper (which is freely available here)… a very positive experience, indeed! 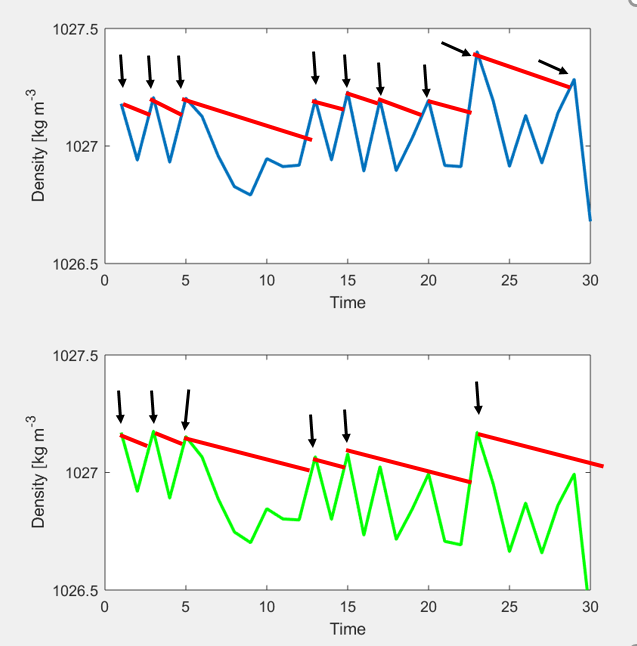 A re-occuring theme on Team Elin is that we like to combine observations, tank experiments and modelling. So this week, Steffi and Mirjam (who both were been instructors on the recent student cruise) went to work on setting up a fjord circulation experiment to complement future student cruises (and to be used in other courses like GEOF105, too).

We now have an experiment that shows how a fresh, yellow inflow (representing the freshwater input into fjords close to their heads by rivers) flows over a initially stagnant pool of salt water. As the freshwater plume flows out of the fjord, it entrains more and more salt water from below, thus thickening and setting up a return flow that brings in more salt water from the reservoir (representing the open ocean) on the right.

We drop dye crystals to visualize the surface current going out of the fjord and the return flow going in, and draw the profiles on the tank to be able to discuss them later.

This experiment is really useful in preparation for a student cruise. Why is it interesting to look at a transect along Masfjorden like we did? Well, because we see in the tank that the freshwater layer should thicken the further away we get from the source. Why did we do the microstructure measurements on either side of, as well as on, the sill? Because there is a huge amount of mixing going on there, just introduced by the tides going back and forth! What would happen if river water was really funneled down to the bottom of the fjord to introduce oxygen to very low oxygen regions? It would introduce a lot of mixing, indeed! All this and more can be seen in this one experiment!

Watch the movie below, and then head over to Mirjam’s blog post about the experiment for more details. Enjoy 🙂

We deploy two moorings in order to keep track of water exchanges over the sill; they will collect data for a year.  Instruments recording temperature, salinity, pressure, and velocity are attached to a rope, which is kept in place by an anchor and floating elements. One mooring is anchored on top of the sill (75m), whereas the other one is placed within the first basin at 460m depth.

The video showing milk being poured into water is an example of the small-scale process ‘turbulence’. In the ocean, turbulence is important for mixing of different water masses. We measure turbulence with a Micro Structure Sonde (MSS) by letting the instrument fall freely down the water column, recording temperature changes and water movement at a frequency of 1024Hz.

If you are interested in reading more about this, check out Mirjam’s blogposts on how to sample and how to measure dissolved oxygen! And a special post with focus on the color change of the indicator when titrating oxygen.

In order to measure the oxygen levels, we lower down an instrument called CTD (as seen in the picture).

The CTD measures conductivity (salinity), temperature and depth (pressure). It has grey plastic bottles attached to it, with which we can take water samples at different depths and analyze for oxygen content in the lab.

By adding chemicals to the water samples, we bind the oxygen so that we later can calculate the concentration through the titration technique.

Masfjorden is 24km long, branching out from Fensfjorden. Masfjorden has three sills (a sill is an underwater barrier), which prevent the undisturbed water flow in and out of the fjord. This is why the oxygen levels near the sea floor are particularly low, limiting the marine life as well as decomposition processes. To get new oxygenated water into the basins, dense Atlantic water needs to flow over the sill – this does not happen very often! This week we will study the Masfjorden water masses through a series of measurements.

This week we are a group of UiB students going on a cruise, and we are taking over the #portalenIGLO. The ship is called Kristine Bonnevie and is one of IMR’s research vessels. Our study area is mainly Masfjorden, but we are also taking some samples from Fensfjorden, both a five hour journey north of Bergen. This week we will show you what we typically are doing on a fjord-oceanography cruise.