Today we are doing the melting ice cubes experiment in fancy glasses, because Elin is giving a fancy lecture tonight: The Nansen Memorial Lecture of the Norwegian Science Academy in Oslo! Cheers!

We each had green ice cubes in our glasses, but one of our glasses contained fresh water and the other one salt water, both at room temperature. Can you figure out who got which glass?

To read more about this experiment, check out this blog post!

Oj, oj, oj – I just received the official invitation to give the Nansen memorial lecture at the Norwegian Science Academy in Oslo – and to have dinner afterwards in this beautiful room! Very fancy!!! It will all take Place on 10th of October – Fritjof Nansen’s birthday. I wonder if there will be cake?! 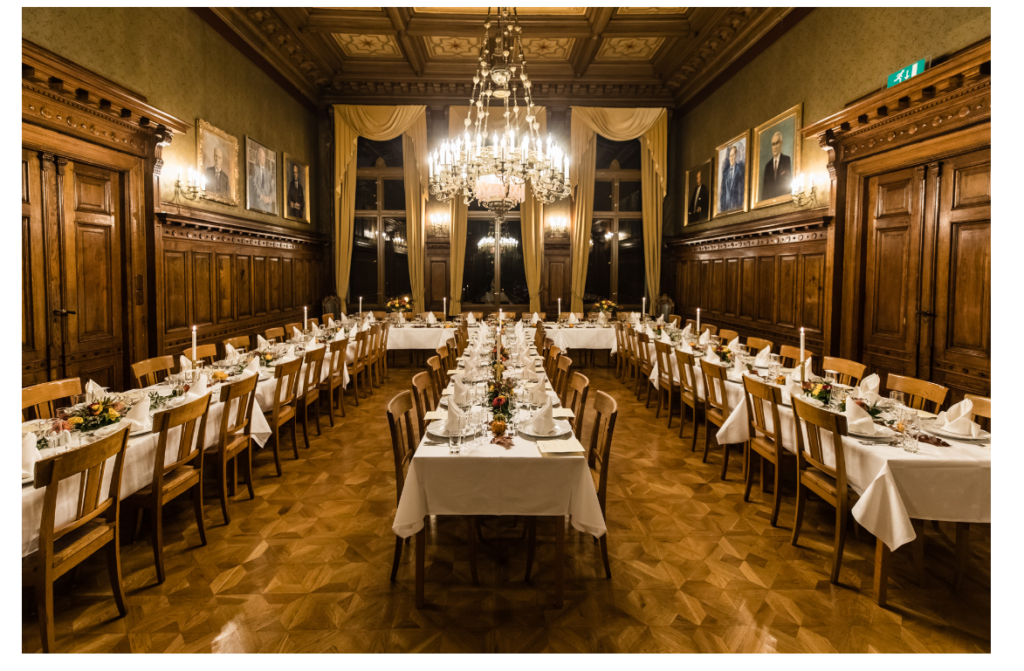 Yesterday Kjersti successfully defended her thesis “Exchange of water masses between the Southern Weddell Sea continental shelf and the deep ocean”!! Hipp hurray for Kjersti! Kjersti is my first PhD-student who finishes – so I admittedly was a bit nervous… but not as nervous as Kjersti… But she did  (as usual!) an excellent job presenting her work to relatives and colleagues her at GFI – and she responded nicely to all the questions from the opponents: Karen Hayewood and Angelica Renner. We had the chance to have three excellent female oceanographers at the stage at GFI – that’s does not happen that often!

While finishing off her thesis Kjersti had found the time to knit mittens to us all (see photo and note the Penguins!) – thank you Kjersti!

…Hurray! We got money from the university to send Nadine (and some instrumentation) onboard “Kronprins Håkon” (KPH amongst friends) to Antarctica next season! KPH is the brand new Norwegian icebreaker and she will sail down to Dronning Maud Land and Fimbullisen in February, 2019.

Fimbullisen is a relatively small ice shelf that overhangs the continental slope in the eastern Weddell Sea. The Norwegian Polar Institute (NPI) has three sub-ice shelf moorings installed there, and two years ago we added an APRES (a handy little thing that you place on top of the ice to measure time series of ice shelf thickness from which one can infer the basal melt rate) to one of their sites. The plan is now to – in collaboration with NPI – also measure what happens outside of the ice shelf cavity.

It took a bit longer than I expected – but here we go – my* latest “baby” is available online!

You can read the full version of the paper here:

or a summary below!

In February last year we recovered a mooring at the Filchner Ice Shelf front (See map below) that we since long had consider lost. The large German ice-breaker Polarstern had failed to reach it twice due to sea ice, and it had now been in the water for more than four years. When we reached the location with (the much smaller) JCR last year, the mooring was only a few hundred meters from the advancing ice shelf front, and the captain was somewhat hesitant to go there – but he did, and the acoustic release on the mooring SA responded and released as promptly as if it had been deployed the day before! Most of the instruments had run out of battery and thus stopped recording – but one of them were still running, providing a four year long data record!

The mooring had several temperature and salinity sensors, and the records from them showed that there is a pulse of very cold (-2.3C!) ice shelf water (see explanation below) leaving the cavity during late summer and autumn each year. The water has been cooled down so much through interaction with the ice shelf base at depth, that there are ice crystals forming within it as it rises and leaves the cavity (I’ll write about what the ice crystals did to our instruments in a later post). The salinity of the cold water was relatively high – telling us that the water most likely entered the ice shelf cavity in the Ronne Depression, west of Berkner Island (see map).

In an earlier paper**, we had shown (using a numerical model) that ice shelf water flowing northward along the Berkner island would turn east when it reaches the ice shelf front (because conservation of potential vorticity hinders water to flow across the ice shelf front where the water depth suddenly changes by hundreds of meters) and exit the cavity in the east. But now the data showed that water was exiting the cavity in the west anyway?! What about the potential vorticity?? Our data also show that when cold water is flowing out of the cavity in the west during late summer, there is layer of less dense (and warmer) water present above it. In the paper we suggest that the presence of the upper, lighter layer breaks the potential vorticity constraint. The layer of less dense water reaches down roughly as deep as the ice shelf itself – and you can imagine that to the outflow it acts as a continuation of the ice shelf.

We now know that water leaves the ice shelf cavity also in the west – but where does it go then? Is there a flow of dense ice shelf water also along the western part of the Filchner trough?

* I say my, but it’s a team effort: many thanks to J.B. Sallée who co-authored the paper and to all the people involved in deploying and recovering the moorings!

As scientists it’s not enough to only do research alone in our little office, but we also need to get among other scientists to find out what new research is being done, to network and to make other’s aware of our important piece of work. Each year, there is a big European geoscience conference (EGU) in Vienna which again took place last week. 15000 scientists attended from more than 100 different countries and I (Nadine) was among them! In my luggage: A poster presenting our experiments at the Coriolis platform and some first results. This was very exciting, because it is a unique opportunity to talk to other scientists doing similar research. I was even co-convener in a session about the Southern Ocean which means I got to pick the talks and helped preparing everything in advance! After that week I was very exhausted, but happy! The program was stuffed with interesting talks and posters about Antarctica, oceanography, ice shelves, ice shelf—ocean interaction and glaciers and I got to talk to many skilled, interested and motivated scientists. All of them loved our experiments on the water-filled mary-go-round!

Writing a scientific article is a long process – you collect the data, you calibrate them, process them and you analyze them. You plot them, think about them, discuss them, think about them again until hopefully, at some point, the data give you results that you can understand and – publish. So you write the paper – in between meetings and teaching you somehow manage to squeeze your outstanding results and neatly prepared figures into the template provided by the journal. Then you submit – and forget about it all until you hear back from the editor three months later: the REVIEWS are back… sometimes it’s like this:

i.e. you quickly find out that your results were not that outstanding and your figures not that neat… the reviewers have filled page after page with “Did you consider…”, “why didn’t you calculate…” how does this compare to..”, “can you really ignore the effect of….”  and “you ought to refer to the paper by mr so and so”…so you start over, you do all the extra analyses that reviewer three asked for, you make new figures, you clarify and expand and include a citation of mr so and so (the reviewer?). You read and write the text over and over and at some point you realize that you’ve done all that they ask for… and that version 6.2 of the paper is indeed much better than version 1.0. So you write a very polite letter to the editor, where you  respond to each and every comment from the reviewers and explain what you’ve changed – and then you resubmit. And you wait. Again. For three months.

… but then sometimes, you get three short lines from the editor stating that you paper is accepted! It will be published!!! YES!!!

I received one of these e-mails the other day – and once the paper get online in a couple of days I’ll let you know what it is all about!

We are excited and grateful for a great opportunity for continued collaboration that has recently presented itself: Elin won a Bjerknes Visiting Fellowship 2018 for me (Mirjam) to visit Elin and the rest of her team in Bergen for a month in 2018!

We have several goals for that visit, but the main one is to develop more hands-on experiments (which we lovingly call “kitchen oceanography”), which parents, teachers, and other educators can use to get children excited about oceanography (and obviously for the grown-ups to play with, too :-)). Between Elin and me, we do already have a lot of experiments which we use regularly and recommend (for Elin’s, check out this site, and mine are here). But we would love to bring them in a different format so that they are easy to find and use, and are well integrated with the ekte data project. And then, obviously, we want to let everybody in Bergen (and all of our faithful readers) know where to find the experiments, and how to use them in science communication.

So plenty of stuff to stay tuned for! We’ll absolutely keep you posted on our progress on here!