Corona is turning our lives up side down – but that’s no reason not to stand up and sing “Happy Birthday” to Prof. Emiritus Arne Foldvik who turns 90 years old today! (Those of you who read Norwegian can read about him here)

Arne started out his scientific carrier as a meteorologist, studying among other things the waves that are generated when wind blows over topography  (he did that using the long tank down in the basement of GFI where I’ve taken my students to play with Nansen’s dead water) – but he later turned to oceanography.  Around the time when I was born he led his first Norwegian oceanographic expedition to Antarctica and the southern Weddell Sea. During that expedition he found what the Americans had failed to find a few years later: The Filchner overflow, an enormous* under water river that carries cold and dense water from the Filchner-Ronne ice shelf cavity to the bottom of the Weddell Sea. This discovery is one of the reasons I’m working with polar oceanography today, as I spent the three years of my PhD revisiting the exciting data that Arne & co had collected in the outflow.

The last time Arne came by my office, we chatted about towed icebergs, melting ice and the experiment I did in my “Nansen’s memorial lecture” (which Arne attended). Arne has been involved in projects where the aim has been to tow icebergs from Antarctica to dry areas in demand of freshwater (originally the middle east, and just a few years ago, to South Africa ). Arne told me, that if one did that, one would get ice into water warm enough, that the results of my experiments would no longer hold.

The density of seawater is a non-linear function of temperature and salinity, and while salinity dictates the density for cold water (causing the lines of constant density to be almost vertical in the TS-diagram below), temperature is more important for warm water (causing the lines of constant density to tilt more). So, that means that while the (fresher and colder) melt water mixture is lighter than the ambient water if it is cold, it will actually be denser if the ambient water is warm enough! Off course we had to try this out – I never got around to doing so, but yesterday, Mirjam finally did!

Somewhat disappointing – we realized that the result is more or less the same, independent of the water temperature. Does that mean the physics (and Arne) are wrong??? Probably not, it probably just means that the molecular diffusion of heat is acting fast enough that the “cold” melt water mixture doesn’t stay cold enough to sink 🙁 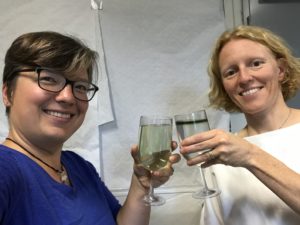 * 1.6 million cubic meters per second – that is almost ten times the Amazon river