Our ice shelf work is now available in a “young-mind-version” – have your daughter / son / grand children / children of your neighbours / random kids in the street and everyone else with a young mind check it out here ! And have a look yourself too while you are at it! It’s a lot easier to read than the text in Nature – and the illustrations are really cute!

Many thanks to Mirjam and to the two young reviewers (Margarita and Isabel) for making this happen!

I remember vivid discussions with Anna over a loaf of freshly baked bread from our new bread machine. We were in the Southern ocean, somewhere in between New Zealand and the Getz Ice shelf in the Amundsen Sea on board the Korean icebreaker Araon and we talked about the moorings we were about to deploy, the proposal we have started writing, the experiments we wanted to run – but most of all we talked about what actually happens when ocean currents meet an ice shelf front. That was four years ago – and I’m super excited to see that a few days the results of those discussions (and a good deal of work on board Araon, on and around the rotating Coriolis platform in Grenoble and in numerous offices around the world) were published in Nature! Ice front blocking of ocean hear transport to an Antarctic ice shelf by A. Wåhlin, N. Steiger, E. Darelius, K. M. Assmann, M. S. Glessmer, H. K. Ha, L. Herraiz-Borreguero, C. Heuze, A. Jenkins, T.W. Kim, A. K. Mazur, J. Sommeria and S. Viboud – in Nature! (For those of you who are not into peer reviewed litterature and scientific publishing – this is probably scientific equivalent to an Olympic gold medal!)

You can read more about what we did in the Coriolis lab here, and about when Karen recovered the moorings here

The first mooring was successfully recovered yesterday (hipp hurray!) by @cisprague & co onboard Araon – but then Araon had to steam towards the Ross Sea to help a fishing boat that sent out SOS – alarm. Finger’s crossed for a happy ending  – and a quick return to science.

Today Vår Dundas, MS successfully presented her Master’s Thesis “Oceanic heat transport towards the Getz Ice Shelf, Amundsen Sea”!She has been working with data from a mooring that we deployed in a trough leading up one of the iceshelf fronts of Getz ice shelf, just east of Siple Mountain in the Amundsen Sea.When we deployed the mooring back in 2016, we referred to it as the “boring mooring”-but Vår did a good job proving that it did not desrve that name! Thank you Vår for a very  nice presentation and all the hard work you’ve put into your thesis! Now you deserve a long and relaxing Christmas holiday, and then we’ll see what happens next! 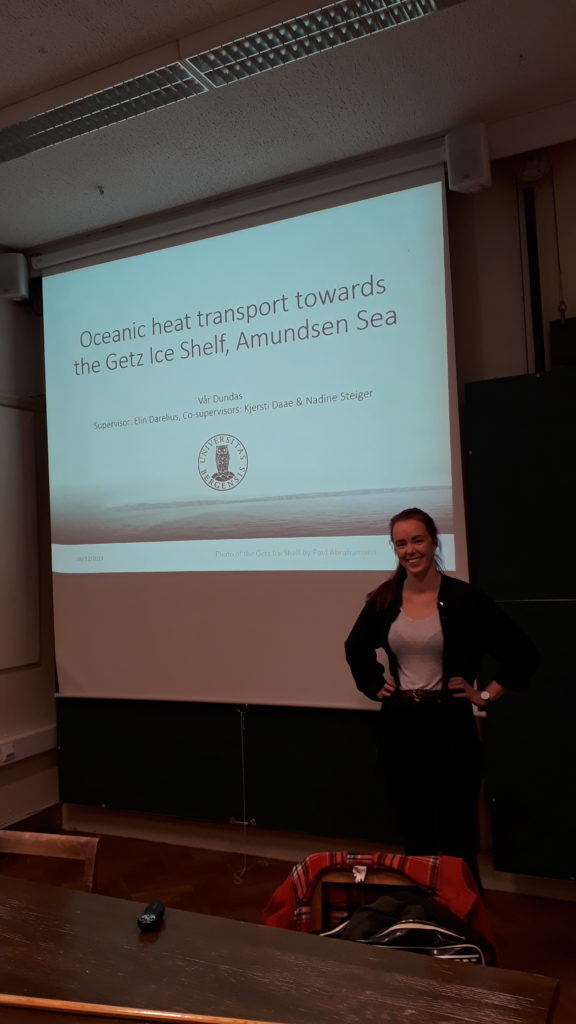