When I was visiting Elin a couple of weeks ago, I was hoping to set up an impressive Taylor column experiment. Maybe my expectations were too high of what is possible to achieve in terms of visualization and I got too convinced of my own sketch to appreciate reality? 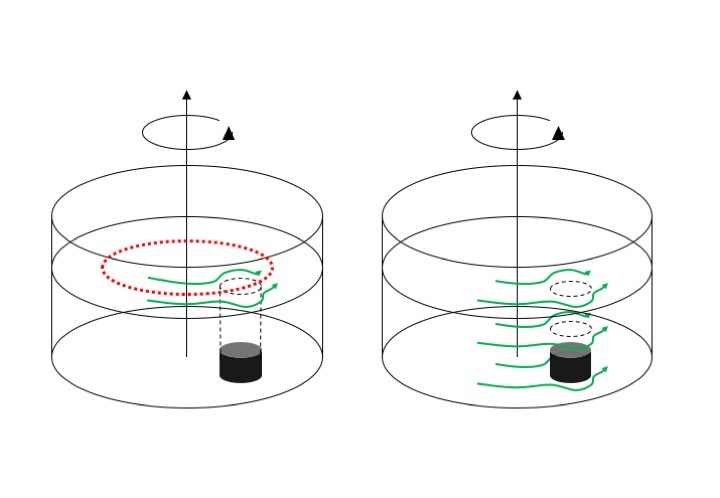 In any case, the picture at the top of this post is as good as it got. We see that the blue dye is stopped by something located above the hockey puck (the Taylor column!), but all the turbulence in the dye curtain makes it difficult to see what is directly due to the Taylor column and what is just pretty 2-D turbulence.

But I haven’t given up on this! Here are a couple more attempts at Taylor columns in a tank under slightly different conditions. And if you have any suggestions, I’d love to hear them! 🙂

Swimming drones and cables that can measure everything from temperature to traffic intensity? Robots that can swim down and collect data from deployed instruments… and charge the batteries while it’s there? Souns like science fiction, but it is all happening at NORCE! Yesterday we visited Anne Hageberg and her colleagues at the marine technology department to learn about all the exciting stuff that they are developing. If things work out we will bring some of them on the next student cruise in March. That would indeed be cool! 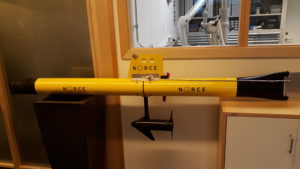 Swimming drone I – the drone can be loaded with sensors and then programmed to swim where you want it to go… or controlled manually, if you prefer.

Remember the experiment on Nansen’s observation of “dead water” that is part of GEOF213? Our movies of this experiment are now featured in a brilliant Youtube video by the german science communicator Doktor Wissenschaft! Check it out below! (It’s in German but we did include English subtitles)

How exciting that we can now share this experiment to a broad public, way beyond the audience that happens to find its way down into the basement! 🙂

One experiment we wanted to run with the GEOF213 course this year were the Topographic Rossby Waves.

The idea is quite simple: We set a solid cylinder in the center of our tank and connect it with a ridge to the tank’s edge. The ridge is just a piece of hose that is taped radially to the bottom of the tank. We then spin the whole thing into solid body rotation. Once it is spun up, we add dye around the central cylinder. We then slow the tank down a tiny little bit, just enough so the water is moving relative to the tank and the ridge.

As the water now has to cross the ridge, it feels the water depth changing as it does so. A changing water depth results in changing relative vorticity to conserve potential vorticity, so the flow starts meandering. 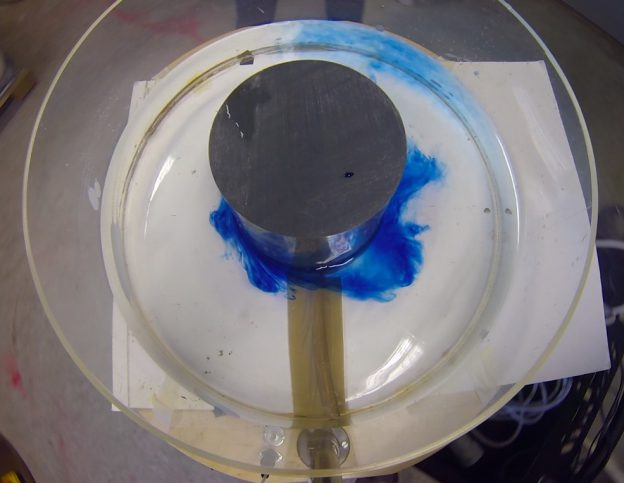 In the end, we felt like the experiment was too difficult to run to rely on it working out when presenting it in class. But that doesn’t mean that I have given up on it. I will conquer the topographic Rossby waves eventually, so stay tuned! 🙂

Another tank experiment that is run in GEOF213 this fall is the one where we are moving mountains. Or at least one mountain. Read last year’s students’ account of the experiment here!

We move the mountain through stagnant water in a tank in order to simulate the flow of water over a ridge. This creates internal waves in the “lee” of the mountain.

Watch the movie below to get an impression of how cool this looks! And don’t be confused by the split screen after the time lapse ends, I was trying to give you the best of both cameras at once…

Instructions for how to set up the experiment can be found here.

The result is now available (in Norwegian/Swedish only) here!