My Python enthusiasm was severly damaged yesterday as I (after a lot of head-scratching) realized that it is not my programming that makes things look strange, but an error in the cartopy* package – when plotting vectors (such as e.g. currents from moorings) in a map using quiver, the vectors are wrongly transformed and end up pointing in the wrong direction… when googling the issue I quickly found solutions and workarounds (thank you StackOverflow!) but still… if I hadn’t tried to plot my scale vector at a 45degree angle I might never have found out…

So, what else can I not trust?

After a bit of struggling in InDesign and with a lot of help from Ellen and google I’ve managed to put the Ninja story together into a book – which is now available online! So if you were wondering what to ask for in your letter to Santa… wonder no more!

Books are sold at “printing price” – no profit to me (but I presume amazon makes a cent or two).

The first of December is Antarctica Day – and since the day and the world seem a bit gloomy today, I thought I’d share a 100% omicron-free Antarctic penguin-party with you.

… for my colleague, mentor, ex-supervisor, favorite feminist, and friend Prof. Anna Wåhlin who just got selected “rådsprofessor” (~council professor) by the Swedish research council! Along with the honor comes a grant of 50 MSeK (5 Million Euros) to be used in a research project on ocean – ice shelf processes in the Amundsen Sea during the next ten years – I’m sure Ran (the Swedish autonomous (unmanned) research submarine) will get to go on many nerve-wracking excursions under the ice shelves and that she will bring back a lot of exciting data and discoveries! Congratulations Anna – and thank you for involving me in your work – it is so much fun to discuss science with you!

It’s been almost ten years since the water in the deepest basin on Masfjorden was last renewed – but now it has finally happened! My colleague Lars Asplin from the Institute of Marine Research in Bergen do regular hydrographic surveys* of the fjords in western Norway– and the last profiles from Masfjorden show increased levels of temperature and oxygen at depth. Between April and August, the oxygen concentrations in the basin have increased from 2 ml/L to 4 ml/L, making life much, much easier for whoever lives down there!

The oxygen concentrations at depth can only increase if new water enters the basin -i.e during a deepwater renewal. A deepwater renewal can take place if sufficiently dense water is lifted up to sill level outside the sill, for example, when northerly winds move the surface water off-shore** and denser water from below is pumped upward. The coastal records from Sognesjøen, suggest that water dense enough was present at sill level during the last part of April – so the deepwater renewal probably occurred around then.

The news about the renewal was waiting for me in the inbox when returning from holiday – along with an e-mail telling me that the UIB-biologists are heading to Masfjorden this week on a research cruise…. after a bit of frantic e-mail writing back and forth we managed to organize that they take a few extra samples of the new deep water for us!

We’ve got moorings on the Masfjorden sill and in the basin that are to be recovered by fjord oceanography students in February – they will tell us more about when and how the renewal happened!! The students will for sure have a lot of exciting data to write about in their report!

* i.e. they measure profiles of temperature, salinity, and oxygen with a CTD.

** due to the rotation of the Earth, the winds cause a transport of surface water to the right of the wind direction (in the northern hemisphere)

… is not a question anymore. All our students learn Python, starting the day they enter the university (and even before), and when teaching you are expected to integrate Python and programming whenever possible.

Of course, it makes sense for the university to promote the use of a free, open-source software rather than a commercial product like Matlab, but for all of us old (and not so old) lecturers at the university who – like me – have done your data analysis and plotting since the beginning of time in Matlab, it is not an easy switch.

I took a Python course more than a year ago, and I’ve done a bit of Python here and there, but for a long time now, it has been one of those uncomfortable “have-to-do” but “not-right-now” things that keep accumulating at the horizon. Until a month ago, when a twitter-thread by a colleague (Thanks, Angelica!) who had decided to take the step (and who enjoyed it!) finally got me to dive headfirst into the Python world… so, I read a Python – book (Python for Data analysis by W. McKinney) and set my mental default “program-to- open-when-time-for-science” to Python (or Jupyter, Python is a programming language, not a program). I did not go as far as to uninstall Matlab, but I’m only using it for emergencies…

I quickly realized that I’m Google-dependent – whenever I don’t know how to do something – Google is there to help, directing me to Stackoverflow or one of the thousands of Python tutorials that are available online. It seems like (almost) every question has been asked before – and that there is an army of Python-enthusiasts out there ready to answer and help*!

Now, Matlab and Python have much in common – it is not like I’m starting to learn programming from scratch. Maybe more like learning to speak Norwegian (rather than Chinese) when your mother tongue is Swedish? You understand what the Norwegians are saying (i.e. you can read and  – at least roughly – understand code that others have written), but to write your own Norwegian text and to speak… hmmmm, not so easy! You quickly get used to all the small differences – like that you have to start counting on zero and not on one, and that you have to use # and not % to comment out lines – but get accustomed to all the different types of variables in Python, to build up a vocabulary of commands and to  “think” in a python way, rather than “translating” your Matlab – way of doing things will take longer time.

I’ve lived more than a decade in Norway – but my children still laugh if I open my mouth and try to speak Norwegian… hopefully, it won’t take that long to be fluent in Python! 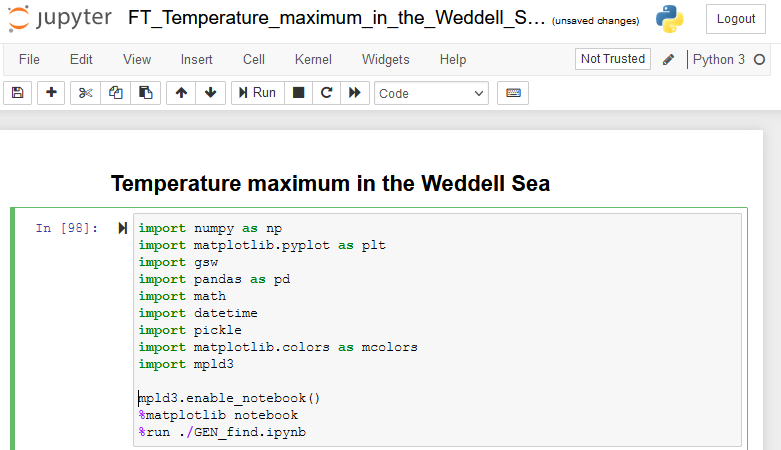 The Norwegian word “hytte” means cabin, and as a foreigner in Norway, you easily get the impression that *everyone* has (or has access to) a “hytte” (if not two or three). That is of course not true, but to “blend” in (end to enjoy lazy weekends away from home) my husband and I bought a “hytte” on an island not far from Bergen a few years ago.

With the kids away on scout camp this week, we took the opportunity to turn the hytte into “Hytte office”. With laptops, food, and an upgraded data deal with our mobile operator in the trunk we headed out to Øygarden earlier this week – and it’s amazing!

I do appreciate the changes in communication that the pandemic has forced upon us – from my “hytte office” I’ve participated in a Ph.D. defense in Paris (Congratulations, Ph.D. Lucie!), discussed figures and results from the Fimbul ice shelf with colleagues in Tromsø and checked in on what our seals in the Weddell Sea are up to… all while enjoying this wonderful view!

… it’s also a real treat to just step outside and munch a few blueberries (yes they are blue already!) while your Python script is munching away on the commands!

Have a nice summer! 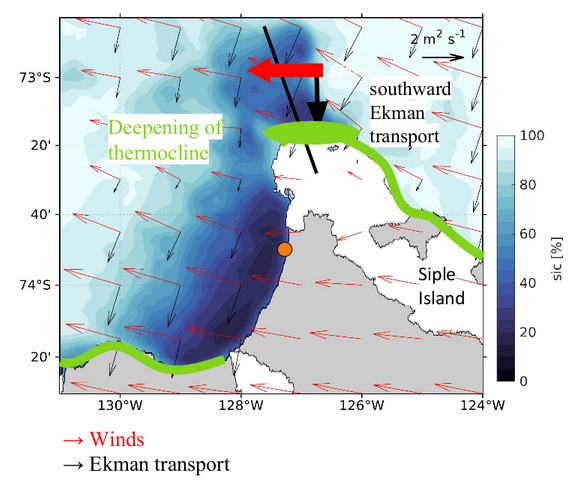 … the flow of warm water into the Getz ice shelf cavity is reduced! Wonder why? Well, Ph.D. Nadine Steiger (who successfully defended her thesis yesterday! Yippie and congratulations, Dr. Nadine!) nicely explains it in a newly published paper:

1) Eastward wind will (in the southern hemisphere) cause the surface water to move southward. (Oceanographers call this the “Ekman transport”). Water will hence pile up along the coast, along the green lines in the figure below.

2) When surface water piles up along the coast, it will press down the warmer water below (Oceanographers call this “coastal downwelling”)

3) The disturbance (i.e. the signal with depressed warm water) will travel along the coast (Oceanographers would call this a coastally trapped, internal wave. The wave is “internal” because the signal is traveling on the interface between two water masses, not on the ocean surface) and reaches the western Getz ice front 3 days after the storm! The figure below shows the observed temperature& salinity in the vicinity of the ice front, and below you see the wind and sea ice concentration. Each time the temperature at depth drops (marked by green triangles) there has been a storm just before! 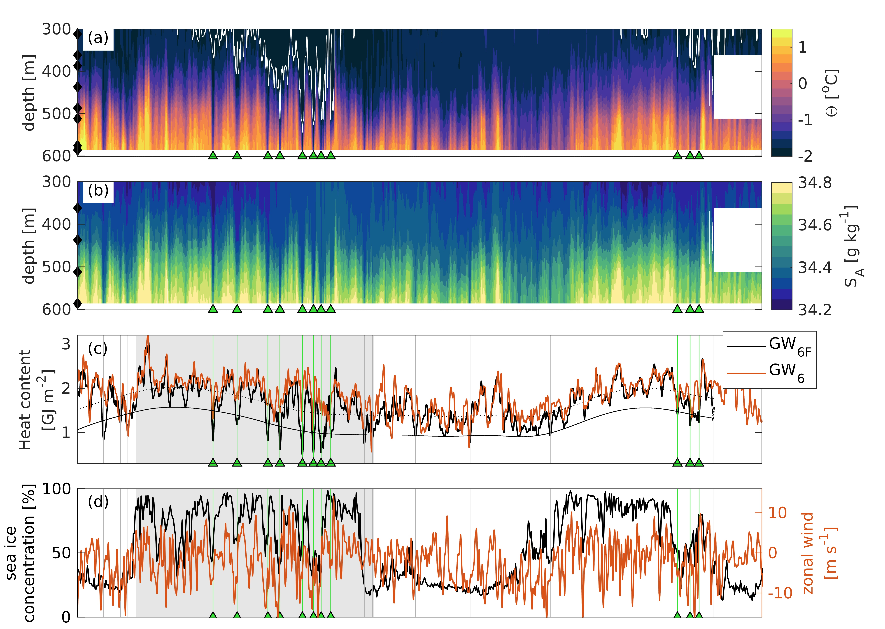 4) When the wave arrives at the ice front, two things happen. Firstly the thickness of the warm water layer is greatly reduced (see above) and, secondly, the current changes direction so that the flow at depth is aligned with the ice front rather than to enter the ice shelf cavity like it normally does.

During the winter of 2016, this happened at least eight times – causing a reduction of the heat transport into the cavity by about 25%!

What a morning! Scrolling through the newly published list of funded projects from the Norwegian Research Council while sipping your breakfast tea and finding this:

is even better than learning that Sweden qualified for the quarter-finals yesterday!

… and further down on the list I found this:

Yesterday the Bjerknes administration announced which of the “internal projects” they are to fund during the next four years – and I was very excited and happy to learn that our multi-disciplinary fjord project (led by Mari Myksvoll) was one of them!

Together with paleo-oceanographers and biologists, we will dive deep into the basins (and the mud/sediments) of Masfjorden to study how (and why) oxygen concentrations have varied in the “recent past” (the last 400yrs or so) and how that affects the ecosystem in the fjord.

I’m really looking forward to working locally – not only “locally” as in a nearby fjord, but also “locally” as in “together with colleagues in neighboring offices and buildings”! It’s is such a great team!