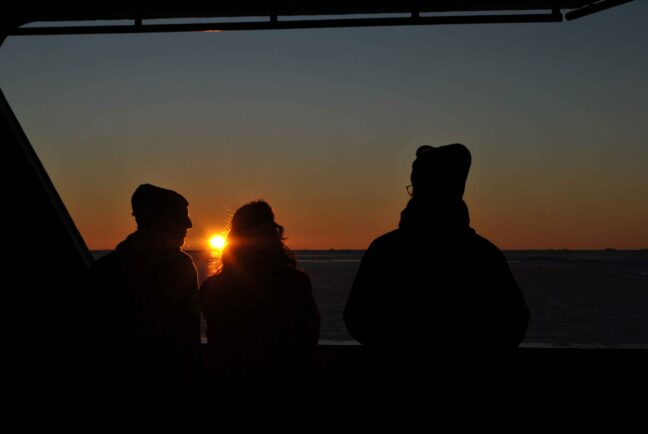 It is easy to write home about cute seals and beautiful icebergs – but
much more demanding to tell about things that are not as nice.
In a way,  every research expedition is a social experiment – you find
yourself isolated on a ship with lots of people you never met before,
you live, eat and work with them and there is no way to escape.  I have
always loved being at sea, to enter this small bubble where everything
is here and now and the world outside is far away. But just like in any
reality show where they close people up together, there will inevitably
be conflicts (and every now and then a romance), there will be good guys
– and bad guys. Unfortunately, I was put on a shift together with one of
the latter. He obviously considered himself superior to me in all
possible ways – in addition to being generally arrogant, he made it
perfectly clear that what I did was no good, that I was not to be
included in discussions (neither scientifical nor social) and that, as
he put it, it was just stressful to have me around. I tried talking to
him about it – without success – and at some point, I just walked away
from it all, crying.

Later, I had a good talk with my group leader about it – many thanks to
him (and others) for support – I’m not on that shift anymore, and I’ve
decided it will do me no good to talk to the person in question again
right now, so I just stay away.

I am still disappointed with my own reaction. I know a male colleague
likely would not have reacted that way – but I also know that a male
colleague likely would not have been treated that way to start with. I
wrote about this on Twitter and was contacted by two younger women who
have had similar experiences, with the same person. Reading those
e-mails made me so angry I had to go down to the gym for an hour to run
it off.

Today is the international Women’s day. More than once in the past have
my daughters returned from school on this day, saying “Congratulations
on Women’s Day” – and more than once have I tried to explain that they
should not be congratulating, that it is actually depressing that still
in 2021, we need this day. That still in 2021 men and women are not
being treated equally.