Breakfast on Polarstern is served between 07:30 and 08:30, and my usual
order to Maya behind the counter is “Zwei Pfannkuchen, bitte” – two
pancakes, please. But today there were pancakes not only on my plate in
the canteen –  the ship is surrounded by them! Rounded, small ice floes
with slightly elevated edges. My favorite type of ice! 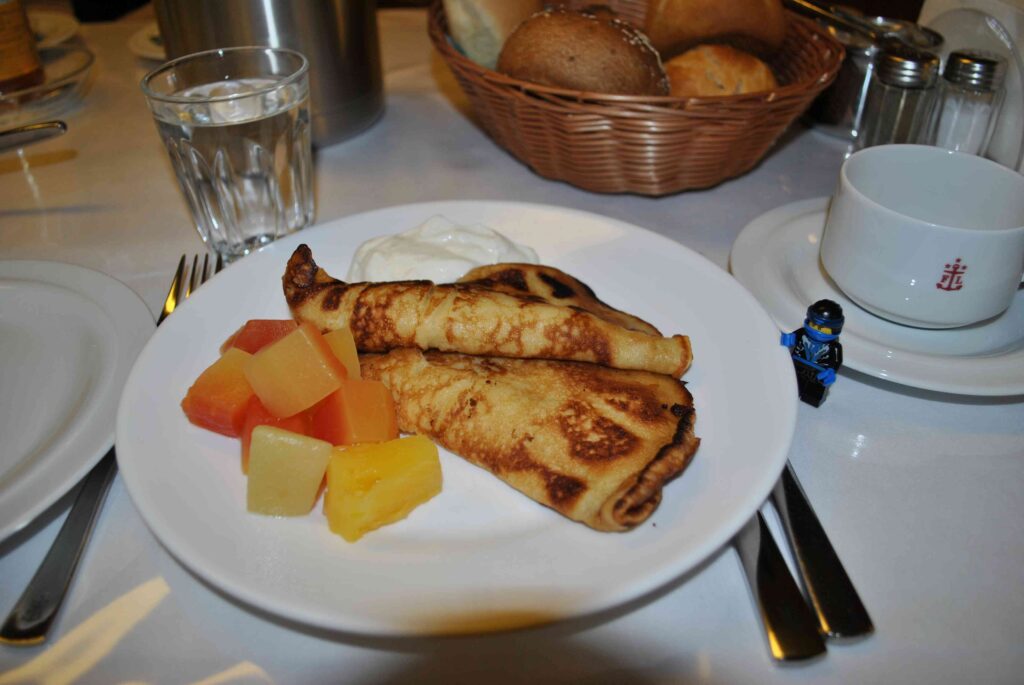 It’s been quite cold the last couple of days and ice formation has
really kicked off. Autumn and winter is approaching rapidly! When I’ve
been up at the bridge to do sea ice observations in the mornings*, I’ve
started to use terms like “Nilas” and “fingerrafting” in addition to
“first and second year ridged floes” which is what we have had around us
before. When ice is formed on the ocean during calm (little wind)
conditions, the ice crystal initially makes a grey  ice “carpet”
(Nilas), that bends nicely over waves and that will break in “fingers”
that slide alternatively under and above fingers from the neighboring
“carpet” when the ice converges.

In windy conditions, the ice crystals will be forming not only at the
surface, but also in the upper (10-20m) of the water column and the
buoyant ice platelets rise to the surface and form what’s called grease
ice (it looks really greasy). Because of the motion in the water
initiated by the wind (Langmuir cells), the grease ice will typically
form streaks in the water surface, aligned with the wind. If freezing
continues, the grease ice will turn into small floes, that continuously
bump into the neighboring floes as they are moved around by wind and
waves, and the floes therefor end up having rounded shapes and elevated
edges – pancakes! With time, the pancakes grow, as small pancakes grow
together or raft on top of each other.

The pancakes we have around us now was formed further north – and the
biologists on board are super excited about these pancakes. Pancake ice
is generally white or grey – but our pancakes are turning more and more
yellow! Some form of biology is thriving on (or under?) the pancakes –
and since the bio-geo-chemists have not seen this before they are all
very keen to get out on the ice to sample!

Personally, I prefer white pancakes on the ocean and yellow pancakes
(with jam) on my plate!

*we do sea ice observations every hour when there is daylight, and seven
o’clock is my slot