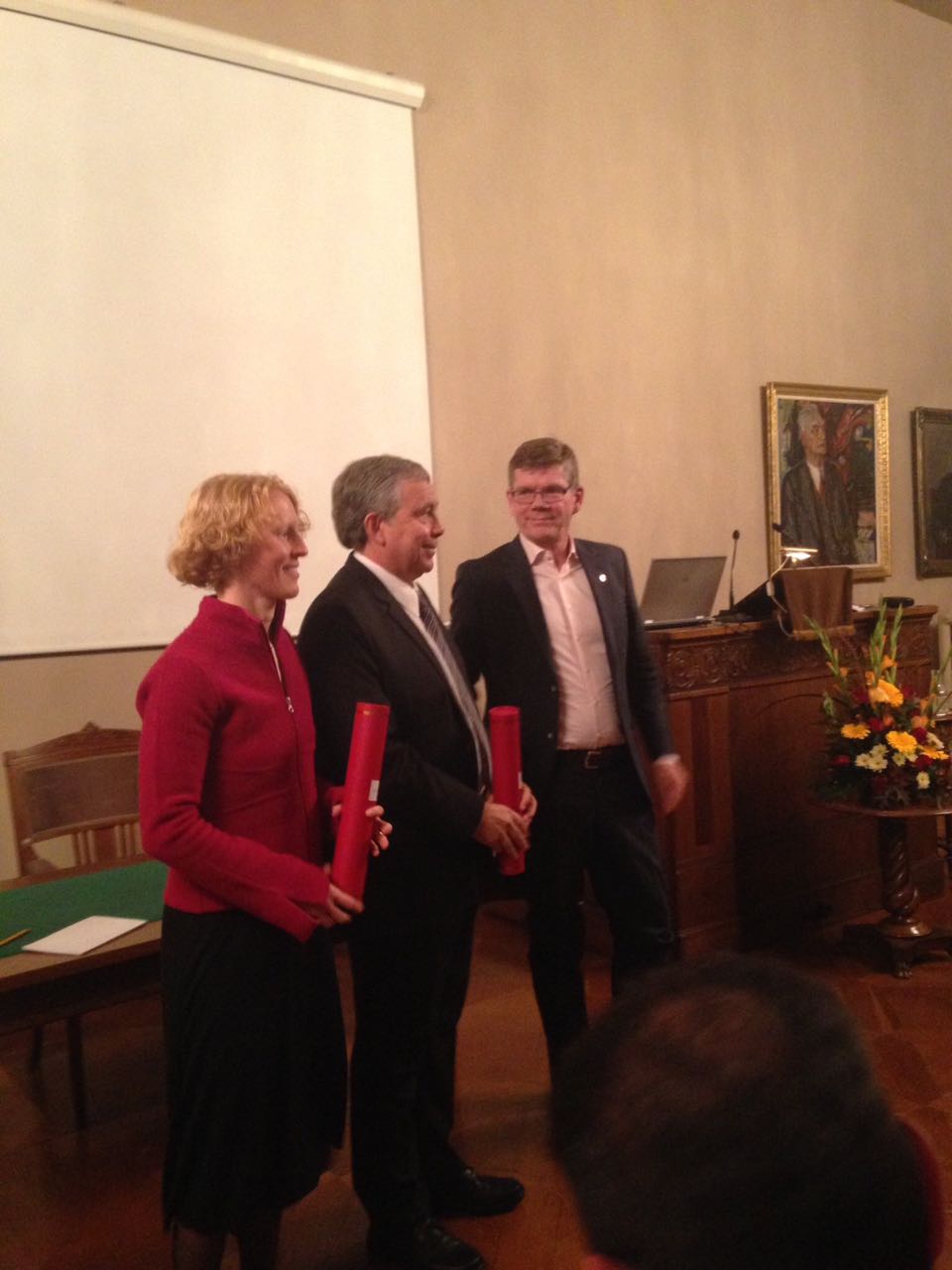 I’m sure there will be an official press release some time later today, and we will link to it when it comes out, but I thought I should let you all know that yesterday, on Nansen’s Birthday, Elin received the 2017 award for polar research of the Framkomitee.

I don’t know what was said in the official laudation or why Elin was chosen, but here are a couple of things I would have said that are more than enough to make her deserve this award more than anybody else I can think of:

That Elin’s research is outstanding doesn’t need to be mentioned specifically, otherwise she would not even have been nominated for a price like this one. When, some time last year, I read the proposal that ultimately funded all our time in Grenoble, doing research on this really cool pool-on-a-merry-go-round, I was so impressed by how all-embracing it was. In contrast to almost everybody else I know, Elin is not a one trick pony. It’s not enough for her to “just go on a research cruise and measure things” (and let me be clear: That in itself is an amazing trick that any pony, and any oceanographer for that matter, should be happy to master!), or “just do tank experiments”. Elin’s research combines sea-going oceanography, experimental work, and numerical models, and not just on paper as is sometimes the case in interdisciplinary research projects, but in practice. She sees how integrating results from one method with results from another will benefit both, and how adding a third could contribute even more. Of course she doesn’t do it all by herself; there is a reason this blog is called “Elin & team’s scientific adventures”. But the way she brings together people from different countries, with different backgrounds both scientifically and culturally, makes her team both stronger scientifically and so much more fun to work in.

Elin is also very invested in sharing her science and her excitement for it with the world. She has been blogging for years (find links to her previous adventures here) for different audiences: Primary school kids, teachers (even including teaching materials like experiments and exercises), the general public. And she gave me completely free reign over what would be published on this blog: We explicitly agreed to share all our “oh sh**, we should have thought about this before!” and “ooooops, that didn’t work!” moments with the world, in order to portrait science in a realistic way and maybe help others who might be struggling with their research by showing that it is normal to spend the first week or more at a new research facility just trouble-shooting (remember our persistent problems with the source, for example? Yes, that is the kind of stuff that doesn’t usually get shared in scientific publications or presentations, but isn’t it nice to know that other people’s research isn’t always going smoothly, either? Not even award-winning people’s research! And let me tell you, when I told other researcher friends about our plans to share this kind of stories with the world, they almost all declared us mad!). I believe these stories need to be shared (and there is actually research backing up this claim), but it takes a very strong person, like Elin, to actually do it!

But in addition to being an amazing researcher and science communicator, Elin is so much more. She is an inspiration and a role model. She makes doing exciting and complex research look easy. Not easy in a “oh, anyone could do it!” way, but in a “despite working really hard, she manages to have a life outside of work that seems to feed her energy levels, provide new ideas, sustains friendships, and ultimately makes her an even better scientist. Maybe I should try that, too?” kind of way. Elin is the kind of person who organises funding and then logistics for an early-career women workshop and then invites more than a dozen of those into her holiday house over night when, on the day of the event, the weather is so bad that we can’t take the cable car up the mountain to go to the place we had planned. Or that urges us to rent bikes in Grenoble and take the scenic route home to enjoy the views of the river and the mountain to recharge after a long and exhausting day in the lab. Or that cooks for her team in Grenoble, taking into account everybody’s different dietary restrictions. And — extremely impressive — Elin didn’t even complain when her phone drowned in her backpack (and not even in Bergen, in Grenoble!), let alone let us see the enormous strain she must have been under when experiments didn’t work out right away and we hadn’t found all the fixes yet! Long story short: Working with Elin means being reminded every day of why I love oceanography, and what a great and rewarding way of spending your time it is to work on exploring and understanding — and sharing with the world! — the wonders and puzzles of the ocean.

There would be so much more to be said about Elin and why I am so happy she got this award, but I have a day job that doesn’t involve writing laudation speeches, so this will have to do for now.

If you want to know what it was like to shake the Norwegian King’s hand (and I don’t even know if that happened, but I hope for his sake that he didn’t miss out on the opportunity to get to know Elin!) and all the other fun events of the day, maybe, if you ask nicely, Elin will tell you herself later. For now, join me in congratulating her! I can’t think of anyone more deserving for this award. Congratulations, Elin!!!