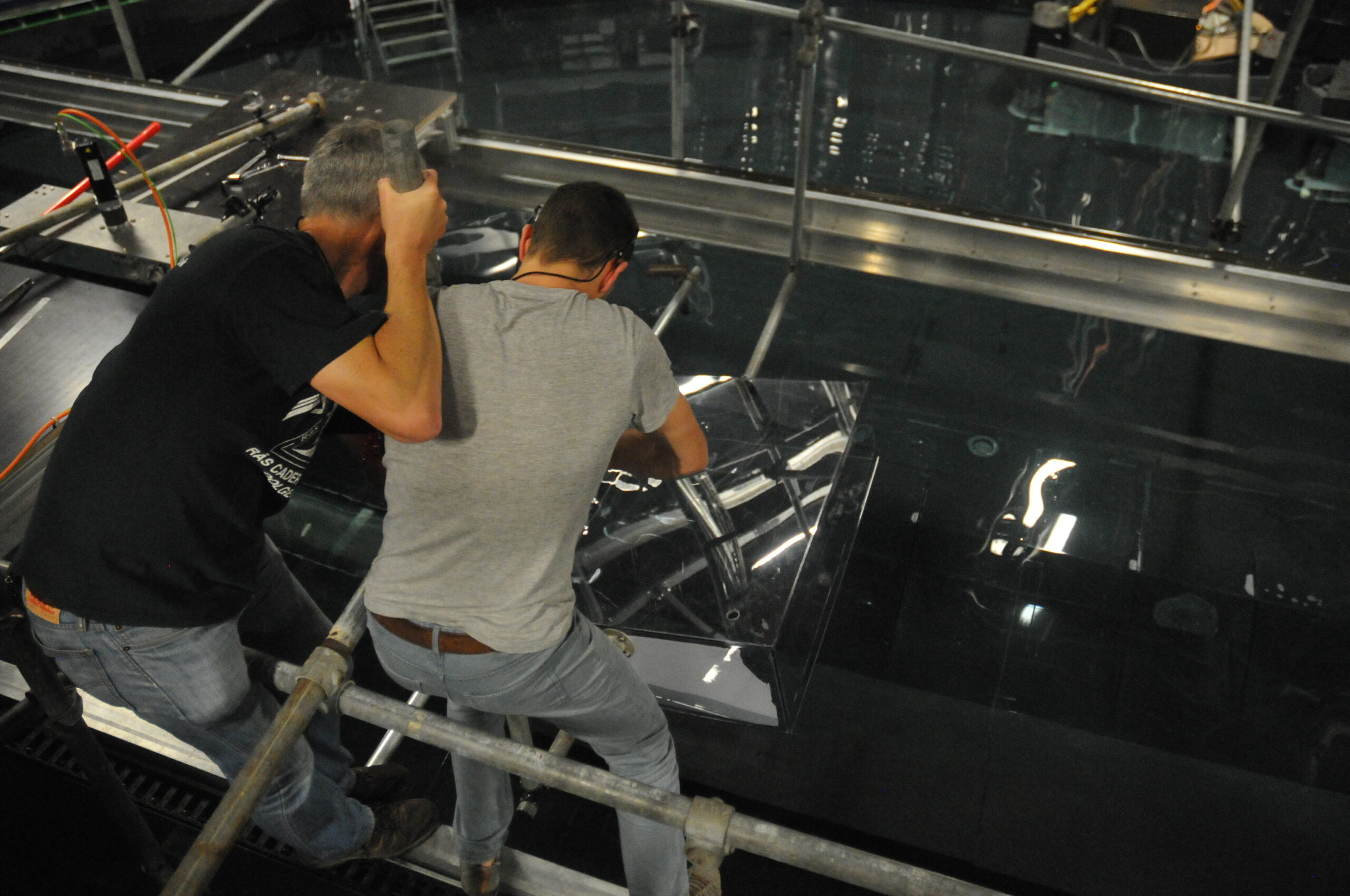 Until now, we have used an “ice shelf” (a plastic box) which had a horizontal bottom (Read more about the general setup of the experiment in Nadine’s post). The bottom of the ice shelf was either right at the water’s surface, or lowered down into the water. What we see then is shown in the gif below, where we are scanning the full water depth from the bottom upward. The ice shelf is resting on the upper edge of the v-shaped channel, so it effectively blocks the flow, which separates at the ice edge and turns mainly left.

Now it’s time to get used to a new vantage point, which lets us look underneath the ice shelf. The source isn’t in the upper right-hand corner any more as it has been in all images and movies on this blog until now. See the sketch below: The source is in the upper right-hand corner and the ice shelf sits in the lower center of the picture, across the v-part of the channel. The gif below shows the same experiment that we saw before, only this time from a similar perspective as shown in the sketch above: When the flow reaches the ice edge, it is blocked and turns to the side.

But then today, we have started tilting the ice shelf (well, Adrian and Thomas have, as you see in the image on top of this post, but I will keep saying “we”).

This might be more realistic — an ice shelf would probably have melted more the further out into the ocean you look (where the ice would have been exposed to melt longer and also the currents flowing under the ice shelf would still be warmer), and therefore we would expect the base of the ice shelf to slope up the further towards the open ocean you go. But this circulation is also one that is easier to understand theoretically: We are expecting the current to stay on lines of constant potential vorticity*. But it can only do that if those lines exist. In the previous experiments, there is a jump in potential vorticity introduced by the edge of the ice shelf, since the water depth decreases drastically as the current meets the ice shelf. Therefore there is no obvious way for the current to take since it can’t conserve its vorticity no matter where it goes (which is why we saw most of it just bouncing off the ice edge and flowing away to the sides). Now, we were hoping to see a circulation where the current, reaching the ice edge while it is flowing approximately half way down the slope, would be guided down the slope as the ice comes further and further down into the water, until at some point it crosses the deepest point of the slope, and turns backward, flowing up the slope and towards areas where the ice isn’t reaching as far down. That way, the water depth the current feels would always stay the same, since it is moving up and down the slope to compensate for the change in height introduced by the ice shelf.

So here is a gif of an experiment where the ice shelf is tilted such that its edge on the source-side is at water level, while the opposite edge rests on the edges of the canyon.

In case you can’t spot it, here is a sketch of the circulation: So what I described above is actually exactly what we observed! Very very exciting! 🙂

*For a quick explanation of vorticity see this blog post — quick and dirty explanation is that if water depth changes, a water column will change its rotation. Either by moving to a place with a different planetary rotation (but it can’t do that in our tank, see here), or by starting to rotate itself and hence changing direction

5 thoughts on “Tilting the ice shelf! Or: Our experiments are getting more realistic”